FAQ: Is Being Overweight Hereditary?
Weight Loss What's inside?
admin
0 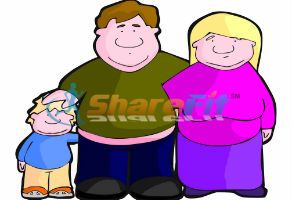 If there are a lot of people in your family that are overweight, does that mean that weight problems are hereditary? This is a commonly asked question, and there is some research that has suggested there are certain genes associated with a greater risk of becoming obese or overweight. Those types of genes might even make it harder for you to shed pounds.

The good news, however, is that the influence of genes on your weight is likely to be really small. When it comes to answering the question, is being overweight hereditary, it might be more important to look at the eating and exercise habits of family members instead.

Is Being Overweight Hereditary? A Bit of Background on Genes

According to WebMD, experts aren’t totally clear on how much of an effect genes really have on a person’s weight in their lifetime. But, they do know that there is one gene, in particular, that may boost the risk of becoming obese. That gene is referred to as FTO. Individuals who have certain differences in FTO can have as much as a 30% higher risk of becoming obese.

However, there are dozens of other genes that have been linked to weight, so that is not the only one that you would need to consider to figure if being overweight is hereditary. For example, there are other genes that determine how much fat is stored in the body.

Is Being Overweight Hereditary? What the Research Has Found

Experts have found that genetics might be able to influence how much you weigh, but to a small degree. Therefore, when you look at overall obesity risk, the answer to the question, “is being overweight hereditary,” is actually: not really.

In fact, a lot of the people who have the genes that would predispose them to becoming obese never even become overweight, particularly if they are making it a point to lead a healthy lifestyle.

In other words, you can gain control over your genes by making it a point to eat right and stay active throughout your life. Your genetics don’t have to dictate your fate!

Why Might Families Have a Lot of Overweight Members?

Even though you can gain control over your genes, and lower your risk of becoming obese or overweight by leading an active and healthy lifestyle, you might still be wondering what causes some families to have a lot of members who are overweight. If it isn’t genes, what is it?

Well, many families are obese or overweight because of factors like:

They also might end up learning behaviors that aren’t good for them, and they might develop unhealthy beliefs about how to eat and how to behave in their daily lives. Because they share meals and habits, they might all end up gaining too much weight, but their genes don’t have anything to do with it.

So, as you can see, the answer to “is being overweight hereditary” is: genetics might play a small role in determining how much you end up weighing, but your actions are much more important!

These Rice Bowls for Weight Loss Are the Perfect Weekday Meals

Why Post-Baby Weight is so Hard to Lose?

Keep Ditching Bad Habits in the New Year with This SHAREFIT Guide
January 21, 2022

Why Sleep Matters to Your Health and Weight in the New Year
January 15, 2022

Commit to a Healthier You in the New Year with SHAREFIT as Your Guide
January 9, 2022
On the Forums