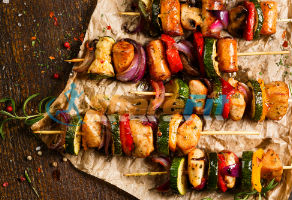 It’s time to step away from pork for a while and have a look at how great chicken sausage recipes can be, and how diverse they can be, too!  Nothing wrong with pork dogs, but when you’re looking for something a little different and a lot leaner, then these are the meals you’ll love to serve your family.

One of the great things about these chicken sausage recipes is that there are so many different ways to serve them!  You can have a delicious, satisfying meal in a spectrum of different shapes and forms, all with the same central ingredient.  Check out these ideas that you’re sure to use all year long.  You’ll be sampling from them once a week!

This chicken sausage recipe couldn’t be easier.  Slice up a red and green bell pepper as well as a yellow onion.  Toss it into a pan heated on medium with just enough oil to stop things from sticking.  Cook the veggies until they’re tender, then throw 1.5 sliced sausages into the mix.  Pour on ¾ cup of your favorite marinara sauce and heat, stirring regularly, until everything is cooked through.

Dice red and green bell peppers as well as a yellow onion and some sliced mushrooms.  Cook in a medium heat pan with a touch of cooking spray to prevent sticking. Add taco seasoning and continue frying until the veggies are tender. Add one sliced chicken sausage and 1/3 cup black beans.  Cook through then serve immediately.  Top with chopped cilantro and ¼ cup diced avocado.

Whether you’re looking for a hearty breakfast or a delicious breakfast for dinner, heat a pan over medium and spray it with cooking spray to start.  Add your diced yellow onion, green and red bell peppers as well as sliced mushrooms (seeing a trend yet?).  Cook until everything is tender, then add two whisked eggs and 1 sliced chicken sausage.  Cook everything through, then season with black pepper before serving.

Microwave 1 medium sweet potato (or bake it if you want the old school touch).  Heat a pan over medium heat and coat it with cooking spray.  Add a tiny amount of olive oil, thinly sliced mushrooms and crushed garlic.  As veggies are nearly ready, add a sliced chicken sausage to this recipe. Season with ground black pepper.  At the last moment, add fresh spinach and cook until wilted.  Half the sweet potato lengthwise and scrape out the flesh, reserving the two halves of the skin.  Mash the flesh with a fork and return to the halves, then top with the pan mixture.

In a medium heat pan, add a touch of olive oil to prevent sticking, as well as crushed garlic, and sliced or quartered mushrooms.  Add a thinly sliced yellow onion. Sauté, covered until nearly ready.  Add a sliced chicken sausage and cook through.  Season with thyme and black pepper. Serve with a sprinkling of grated parmesan cheese.

In a medium heated pan coated with cooking spray, add a drop of olive oil as well as thinly sliced green and red bell peppers, a finely diced onion, and thinly sliced mushrooms.  Cook until crisp-tender, then add a chicken sausage and a half as well as ¾ cup of marinara sauce.  Cook until done, then add zucchini noodles at the last moment, stirring until everything is heated through. Serve.

On bbq-friendly skewers, alternate diced red onion, green and red bell peppers, 1.5 sliced chicken sausage slices and pineapple.  Thinly coat with teriyaki sauce and grill over indirect heat, turning regularly until the veggies are crisp-tender.  At the last moment, cook over direct heat for a touch of char to taste.

Heat a pan over medium with a touch of olive oil to prevent sticking. Add fresh crushed garlic and 1.5 cups of quartered brussels sprouts. Sauté covered.  When the veggies are nearly ready, add thinly sliced mushrooms and a sliced chicken sausage. Cook through, then season with black pepper.  Serve under a sprinkling of parmesan cheese.

The Joy of Eating in Season Summer Produce