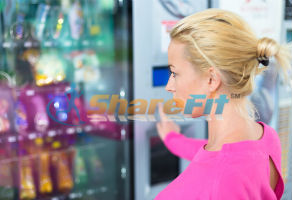 This week’s SHAREFIT guide arrives at the end of January, but it’s not too late to keep ditching bad habits in the new year.  The holidays may not feel like they just happened anymore, but it’s always a great time to make smart healthy decisions for yourself and to remind yourself to keep them up.

We’ve now reached the point when the vast majority of resolutions have either failed or are on very shaky ground.  You may have heard that only about 10 percent of resolutions are ever actually reached and maintained until the end of December. Still, by this point, most of them are already done.

Use that thought to motivate you! Use it to remind yourself of the importance of ditching bad habits in the new year! Let it drive you to be among the 1 in 10 who get to where they want to be by the time you’re preparing for another holiday season.

Use these tips to remind you of why you want to ditch bad habits in the New Year, and how important it is to you. They will also give you little ways to make sure you stay on track, even during times when you might otherwise slip back into old habits.

1 – Stop Yourself from Stress Eating Before It Happens

If you already know that the next time you’ll be stressed, you’ll head to the pantry to see what chocolaty treats you can find in there, or what salty snacks you can mindlessly munch, then stay a step ahead of yourself! Keep your biggest temptations out of the house. You might feel a bit ticked that they aren’t there when you look for them the first couple of times, but the key is that you won’t eat them! It won’t take long before you don’t look for them as often.

Instead, find ways to de-stress that have nothing to do with food. Do a high-intensity workout, dance to music in your living room, read a book, have a bubble bath, or do a great guided meditation, for instance.

2 – Know When You’re Likely to Cancel Your Workouts

Are you the kind of person who promises themselves that you’ll go to the gym after work, but then feels tired and drained and heads straight home instead? Don’t keep making the same promise and failing yourself. It will only harm your confidence and motivation. Instead, exercise first thing in the morning. Get up and do it. That way, it’ll be done, and you won’t have any excuse not to do it later.

While you’re ditching bad habits in the new year, don’t forget the ones that make you eat another pasta in a creamy sauce when you know all you should be having is the grilled chicken salad. You love that salad and it’s nutritious, but when you’re hungry, that creamy pasta looks absolutely irresistible.  The trick is to look at the menu online early, before you’re very hungry. Make your choice and don’t even peruse the menu once you’re at the restaurant. Use that opportunity for great conversation instead. Then, order what you decided on in advance and enjoy it!

Did you miss last week’s step in the SHAREFIT Guide to a Healthier You in the New Year? Check it out now and learn about one of the most overlooked way to greatly improve your health.

Peanut Nutrition: Healthy Recipes and the Benefits You’ll Enjoy from Them

Meals to Avoid with Diabetes: Spotting Foods with High Glycemic Loads
May 23, 2022