We Rated These Fast Food Burgers by Nutrition
Nutrition What's inside?
admin
0 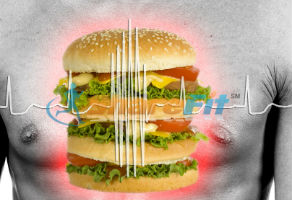 Sometimes, you just want a burger. While definitely not the healthiest or the most waistline-friendly option out there, there’s nothing wrong with satisfying your cravings for a bite of fast food on occasion. That said, when you do plan to get yourself a tasty meaty treat, you’ll discover that there are some burger options that are better than others in terms of saving you on calories and fat. Here, we have ranked popular fast food burgers by nutrition – from the lowest calorie offenders to the highest – to give you an idea of what you might want to avoid and what might serve as a better alternative.

One of the most well-known burgers in America, the Quarter Pounder with Cheese has been a Micky D’s menu item since 1971. It continues to be a popular burger today and if it’s your go-to sandwich at McDonald’s, the single patty standard version of this burger contains:

Although it is certainly not the worst burger out there, you can still save yourself 100 calories by choosing to order a Double Cheeseburger at the Golden Arches instead.

Wendy’s has some delicious burgers and one of its most popular is the Dave’s Single. Originally known as simply “The Single”, when it debuted back in 1969 at the first Wendy’s in Columbus Ohio, this classic sandwich is a go-to for many Wendy’s fans. Whether you score this burger on sale or at its normal price, it gives you:

Want to save 180 calories? Order a Double Stack Wendy’s burger instead.

On the menu since 1971, the Jumbo Jack Cheeseburger was created as Jack in the Box’s answer to the Big Mac. In terms of fast food burgers by nutrition, while this popular burger isn’t the worst for you at this restaurant, its high calorie sauces do pack a calorie punch:

If this sandwich is a must-have for you, you can save yourself 80 calories by ordering a standard Jumbo Jack without cheese.

At a time when Burger King’s top competitor McDonald’s was still selling only small hamburgers, BK introduced the Whopper in 1957, which became the company’s signature product. Standing the test of time, the fan favorite Whopper with Cheese will give you:

Need room for more calories? Opt for the Whopper Jr. and save yourself 430 calories.

The popular West Coast fast food joint In-N-Out first opened its doors in 1948. Since then, the brand has steadily grown adding more burgers to its menu, including the Double-Double, Animal Style. What does this double patty and double cheese “Animal Style” (all the fixings, plus secret sauce) burger give you:

As far as fast food burgers by nutrition go on this list, the Double-Double, Animal Style is the saltiest and the highest in saturated fat. You can easily save yourself 300 calories at In-N-Out by ordering their standard cheeseburger, instead.

Since 1986, Five Guys has been producing some of the most delicious fast food burgers in America. Among its top menu items is the Cheeseburger. Even though this sandwich is composed of only two patties, one slice of cheese, ketchup and mustard, it’s still the fattiest burger with the highest calories on this list:

You can save yourself 220 calories by ordering a Five Guy’s Little Cheeseburger, instead.

The list above shows that there are fast food burgers out there that are lower in calories, saturated fats, and sodium than others. However, at the end of the day, a fast food burger is still treat food low on the nutrition scale and high on the fat, sodium and calorie scale. It’s important to always be mindful of this fact, no matter where you might choose to eat your next burger.

0
0
0
0
0
nutrition
Related Posts:
Use Protein for Muscle and Weight Maintenance