Are Fitness Tracking Gadgets Everything They Claim to Be?
Exercise
admin
0 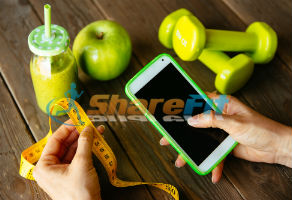 Lately, it feels like there are more people who are wearing fitness tracking gadgets than those who aren’t. Just in time – so to speak – for everyone to stop wearing wristwatches, now we’re all wearing trackers and smartwatches instead.  That wrist-based real estate that cleared up when watches became obsolete didn’t take long to be filled by a Fitbit, Garmin, or Apple Watch.  But are they really helping?

Fitness tracking gadgets often come with a wealth of features.  Everything from the most common pedometer, which counts the number of steps you take while you’re wearing the gadget, to heart rate monitors, calorie burning calculators and the number of flights of stairs climbed. That’s only the start! These gadgets can also track sleep, distance traveled in a day, and with the help of a companion app, additional features such as calories consumed and the number of glasses of water you’ve had to drink.

Depending on the model you’re wearing, it might remind you to get up and move around every now and again, and you might be able to log additional specific workouts such as your runs or the laps you’ve been swimming.  Some have location features that will let you map your run as well.

Impressive…But Do They Help with Fitness and Weight Loss?

There are two important things to remember when it comes to the expectations you have about fitness tracking gadgets:

Remember that just because you slap a smart device on your wrist, it doesn’t mean that you’ll suddenly become fitter or slimmer.  You need to use the information you glean through its various calculations and data outputs.  It’s all well and good to know how many steps you’ve taken, but if you’re not using that information to adjust your habits to ensure you’re adopting better lifestyle habits, you won’t get any closer to your goal.

Quite a bit of research has been started to help to better understand the benefits and drawbacks of wearing fitness tracking gadgets. Studies are examining everything from the accuracy of the features to the benefits on motivation, mental health, fitness, weight loss, and other factors.

A Note About Accuracy of Fitness Tracking Gadgets

Overall, most popular models are relatively accurate when it comes to the heart rate and step tracking.

Steps are most accurately tracked when the device is worn on the non-dominant arm. Moreover, step counters can easily be fooled by activities such as clapping or gesturing dramatically while talking.

If the motion is similar to swinging the arm while walking, it may record steps that weren’t taken.  Similarly, other models rely exclusively on arm motion, which means that if you’re pushing a lawnmower, shopping cart or snowblower, the hundreds of steps you take won’t be recorded as long as your hand is on the handlebar, and your arm isn’t swinging.

Stair climbing and calorie counting features are notoriously off-base. Calorie counters – like those built into some exercise equipment, very frequently overestimate calories burned by any given activity.  This can lead wearers of fitness tracking gadgets to overeat, thinking they have more wiggle room than they actually do.

Depending on your perspective, this can be funny or frustrating, as an inactive but windy day can lead to being awarded a digital badge for a new personal best in stairs climbed. Naturally, this also adds more calories to those available for you to eat in a day, since the device thinks you were far more active than you were.

0
0
0
0
0
exercise, fitness
Related Posts:
Fun Summer Activities to Get Active and Have a Great Time

Do You Need to Exercise to Be Healthy?

How to Exercise When You Have No Time for Workouts?

Fruit Juice Calories and Sugar Mean it is Not a Healthy Drink
October 3, 2021

Use These Fall Dessert Hacks for Sweet Treats at Half the Calories
September 27, 2021
On the Forums