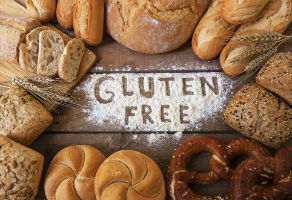 Gluten. Is there such thing as a six letter word? If so, gluten might just be the naughty word of our decade. Gluten has been scrupulously demonized in the press, locker rooms, and even our own homes, with complaints ranging from diarrhea to weight gain.

It would stand to reason that- with gluten being so fraught over- most of us would have a more comprehensive understanding of what gluten is, where it is, and what it does in the body. Interestingly, the opposite seems to be true.

Gluten is a protein found in wheat, barley, rye, and triticale, as well as foods containing the aforementioned ingredients.

What foods and beverages contain gluten?

What’s the difference between gluten intolerance/sensitivity and Celiac disease?

Both gluten intolerance/sensitivity and celiac disease are a hypersensitivity to gluten. However, the causes and degree of sensitivity are different. Celiac disease is a genetic autoimmune condition that damages the lining of the intestine, causing malabsorption and nutritive issues upon ingestion of a gluten-containing product. Symptoms of Celiac disease include anemia, malnutrition, weight loss, low energy, diarrhea, cramping, stomach upset, and skin rash, amongst others. It’s estimated that 1% of the population has Celiac disease.

Does going gluten-free benefit people without a gluten intolerance or celiac disease?

Potentially. Ready for the kicker? It could also potentially make your diet worse. Historically, going gluten-free entailed cutting out many processed food products, to the benefit of overall health. However, the increased popularity of gluten-free diets has prompted the food industry to churn out hundreds of gluten-free replacement foods, with everything from desserts to bread now offered in gluten-free formulas. Often, gluten-free formulas contain as many (if not more) Calories than the original (gluten-containing) product. Making matters worse, many gluten-free products are actually higher in sugar, salt, and fat, thanks to the textural elements lost when gluten is removed. In an effort to increase palatability, manufacturers are forced to increase fat, sugar, salt, or all three.

If your intent is to kick gluten in hopes of consuming a more natural, unprocessed diet, your best bet is to cut out any food that comes in a box-regardless of whether that product contains gluten. The majority of your diet should be comprised of fruits, vegetables, lean meats, healthy fats, seafood, and whole grains. Hoping weight loss will tag along as an added benefit? We’ll get to that in a minute.

Does gluten cause weight gain?

Not directly. While over consuming foods containing gluten may cause weight gain, the gain is due to Caloric overconsumption (ie, eating too many Calories, albeit from foods containing gluten), not from the presence of gluten alone. For example, if you were to consume an additional slice of bread each day for a year, with that slice of bread containing 100 more Calories than the amount needed for you to maintain your current weight, you would gain 1 lb in a year from Caloric excess- not because that bread contained gluten.

Maybe. If you opt to go gluten-free by cutting out certain foods entirely (without replacing them with gluten free alternatives), you may reduce your Caloric consumption to a degree that prompts weight loss. However, if you replace a food containing gluten (for example, pasta) with a gluten-free alternative (rice pasta, etc), then your weight will likely remain the same. Many people who switch to a gluten-free diet actually gain weight by inadvertently consuming more Calories through gluten-free foods than they were through foods containing gluten.

Remember, a food being gluten-free isn’t necessarily an indicator of health- gluten-free cookies are still cookies. Moreover, many gluten-free products are actually more processed and contain more sugar, salt, and fat than similar products containing gluten. Often, manufacturers are forced to add excessive amounts of sugar, salt, or fat to increase palatability that may be lost due to the gluten-free nature of the product.

If your goal is to lose weight while eating a gluten-free diet, pay attention to your total Caloric consumption, and opt to reduce gluten by replacing foods like bread or pasta with lower Calorie, lower carbohydrate alternatives, such as lettuce wraps or zucchini noodles.

What are some easy, whole-food alternatives to gluten-containing foods?