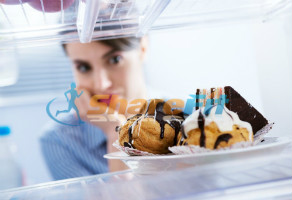 “I’m never bringing cookies into this house again!” You vow as you toss the now empty box of cookies into the garbage after a whirlwind cookie binge.

If you’ve ever sworn off a food altogether or felt as though a particular food acts as a trigger, you’re not alone: many people who struggle with their weight find that certain foods trigger them to overconsume, or set them off on a cycle of overconsumption of various food items.

If you’ve ever started with “just a bite” and ended up finishing a container, or sworn that you’d eat “just one”, only to fall into a day or week of overeating, it’s likely that you have a few food triggers.

For long term weight management, the more effective method is to gradually become more comfortable and accepting of having trigger foods in your environment through the process of repeated exposure.

This work is much like exposure therapy: continually exposing yourself to a trigger in increasing degrees until you are able to encounter the trigger fully without engaging in the original response.

For example, a child who has been bitten by a dog (and is subsequently terrified of dogs) might first be gifted a stuffed dog to name and cuddle.

As he or she becomes more attached to the stuffed dog, the child may watch tv shows containing dogs.

The next step may be watching their mother, father, or sibling pet a small dog. Eventually, he or she may work up to petting a small dog and eventually big dogs.

In the context of food, it’s useful to make a list of trigger foods and the areas you encounter them.

For example, chips may be a large food trigger, but they may be a more prevalent trigger at home than work. In this instance, you may start by standing near coworkers at work eating chips and sitting with your uncomfortable emotions.

Stay calm and pay attention to your thoughts. If you find yourself wanting the chips, slow down and ask yourself: What part of me is wanting the chips? The logical side of me, or the emotional side? Do I just want the flavor? Will it kill me if I don’t have the chips right now? Are the chips going anywhere?

After a period of successful time, remove yourself from the area.

Continually practice this in one successful environment before moving to the next step or next most challenging environment until you are able to engage with the trigger without engaging in the previous pattern of unhealthy behavior.

Remember also that exposure therapy will have its failures along the way.

When you do encounter failure, make it a point to write down the thoughts you have proceeding the failure: becoming aware of these thoughts will allow you to determine positive or helpful thoughts to counter the unhelpful or negative thoughts that allowed for the regression or maladaptive behavior.