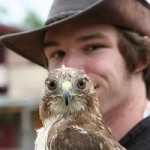 I live in L.A. I work, I like birds and I have a book review website. I'm trying to stop my weight from going up and down throughout the year with a steadier diet and exercise plan. Going to need some luck, here.

In the past week