#ParenthoodProblems: The Parenting Issues That Put Weight on and Keep it on. Plus, What to Do About It! Part 1
Health What's inside?
Morgan Medeiros MSc
0 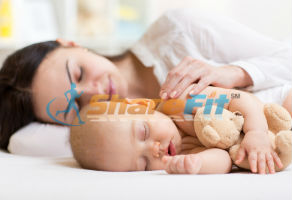 Gained a little weight (or a lot of weight) since having your kiddos? You’re not alone: 60% off parents (dads included) gain and retain more than 10% of their existing body weight in the first five years after having children. 47% of parents retain that weight for the rest of their lives. This easily makes it one of the top parenting issues.

While this parenting issues statistic is- quite frankly, a little depressing- parents aren’t fated to live in unhappy, unhealthy bodies forever. There are a number of innocent mistakes and emotional traps that parents fall into that predict weight gain and make weight loss difficult.

If you’re struggling to lose weight post-baby (heck, even post-teenager), we’ve got the details on some common traps, and how to avoid them.

Preparing one meal for the adults and a second for the kids? You might want to rethink that.

While it can seem innocent to throw a tray of chicken nuggets in the oven or stir together a box of macaroni and cheese, the decision to do so may come back to haunt you.

First, even stirring together a box of macaroni and cheese takes effort and creates more dirty dishes.

Second, it often puts a high-Calorie, unhealthy food in front of you that you’ll be tempted to sneak a bite or two of, even if you just finished your own healthy dinner.

While these small bites may seem benign, they add up fast: consider that two bites of macaroni and cheese contains upwards of 100 Calories (80, to be exact). Those two nightly bites adds up to an additional 2 lbs each year.

Resisting those bites takes mental and emotional energy that can be in short supply when you’re working hard to change your habits.

By getting the entire family on the same nutrition train, you’re reducing the amount of effort it takes to stick to your own plan, saving precious emotional energy.

You love your kids: but that doesn’t mean they’re mentally stimulating. Kids can be hilarious, lovable, draining, and absolutely boring, all at the same time.

Prior to parenthood, your mental stimuli was provided by other adults: not cartoons and conversations held at the level of a three or four year old.

When your brain is bored, it seeks out easily-accessible sources of interest and pleasure, with food having a high evolutionary drive.

This often leads to snacking- even when you’re not hungry – a definite parenting issues struggle you’ll want to avoid.

The remedy? Get out of the house!

By running errands, going to the park, going to the gym, or joining a social group or event, you’re able to get you and the kids out of the house, interacting with other adults and reducing the stress and boredom that can come when your only company is still in diapers.

What is Crohn’s Disease?

5 Minute Breakfast Recipes You’ll Use Every Week
May 29, 2021
On the Forums