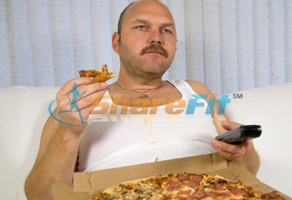 One of the areas in your home where you might find it hard to stick with your diet plans is your living room. That’s because there’s a connection between watching television and weight gain. Keep reading to see what we mean.

Watching Television and Weight Gain: Why There’s a Connection

These days, binge watching your favorite television show is a popular pastime. Unfortunately, this leads to hours spent on the couch, leading to a sedentary lifestyle. Adults and kids alike can turn into couch potatoes, and all of the time spent watching TV can lead to weight gain and a higher BMI, which can then lead to an increased risk of various diseases.

Another way that watching television and weight gain are connected: it is really tempting to reach for a snack while you are watching a show or movie. And, when you mindlessly consume snacks while you are engrossed in a show’s storyline, you could easily end up eating way more calories than you thought you would.

Even if you settle down to watch TV without a snack in your hands, all of the advertising that you’ll come across, most of which focuses on promoting high-fat and high-calorie treats, is sure to make you want to have something tasty. And, let’s not forget about the sugary beverages, like soda, that you are tempted to consume as well.

According to a study, adults who had access to both unhealthy and healthy food options while they were watching TV were more likely to go for the food when they were exposed to advertising that featured food. Individuals who were exposed to non-food ads, on the other hand, consumed less of the unhealthy and healthy food options. This just goes to show you that the simple act of seeing a commercial about food can make you crave something to eat or drink even when you normally wouldn’t.

How to Avoid the Trap of Watching Television and Weight Gain

There you have it: some ways to make your living room a healthier space while working on maintaining a healthy weight!

0
0
0
0
0
bmi, body mass index, unhealthy habits
Related Posts:
Is Your Home a Health Haven or Is It Packed with Diet Busters?

What You Should Know About Weight, BMI and Body Fat

Does BMI Really Matter When It Comes to Your Overall Health?

FAQ: Can You Be Overweight and Healthy, or Is That Impossible?

Joint Pain and Diet: How Food Choices Affect Your Joints

Is Maple Syrup, Honey, Agave, or Coconut Sugar Better for You Than Regular Sugar?
July 4, 2020
On the Forums